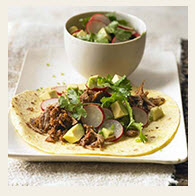 1.- Fish “Tinkinxic” originally from Riviera Maya area, delicious!! This is an advice from Lupita so i wouldn´t miss it 🙂
2.- “Cochinita pibil” is a local dish you need to taste and find out by yourself.
3.- “Chiles”: you need to be careful with the great variety of Chiles that Mexico has, from “Chile verde o Jalapeño”, traditional for the typical mexican green sauce, it´s not as furious as the chile “habanero” very common in this region which you must pay attention. The chiles poblanos occasionally are very spicy too. There are chiles “piquín” which accompanies fruits or salads, very nice as well!
4.- Chilaquiles: this popular traditional breakfast dish features lightly fried corn tortillas cut into quarters and topped with green or red salsa (the red is slightly spicier). Scrambled or fried eggs and pulled chicken are usually added on top, as well as cheese and cream. Chilaquiles are often served with a healthy dose of frijoles (refried beans).
5.- Pozole: according to anthropologists, this pre-Hispanic soup was once once used as part of ritual sacrifices. These days chicken, pork and vegetarian pozole versions are readily available in more everyday surroundings. Made from hominy corn with plenty of herbs and spices, the dish is traditionally stewed for hours, often overnight. Once ready to serve, lettuce, radish, onion, lime and chilli are sprinkled on top.
6.- Tacos al pastor: this historic dish is one of the most popular varieties of tacos, with origins dating back to the 1920s and 30s and the arrival of Lebanese and Syrian immigrants to Mexico. To create tacos al pastor (meaning ‘in the style of the shepherd’), thin strips of pork are sliced off a spit, placed on a corn tortilla and served with onions, coriander leaves and pineapple.
7.- Guacamole: is undoubtedly one of Mexico’s most popular dishes but few know that this traditional sauce dates back to the time of the Aztecs. Made from mashed up avocadoes, onions, tomatoes, lemon juice and chilli peppers (and sometimes a clove or two of garlic), guacamole is often eaten with tortilla chips or used as a side dish.
https://playthewcc.s3.eu-west-1.amazonaws.com/wp-content/uploads/2015/02/05155653/nogal.jpg 196 195 playthewcc https://s3-eu-west-1.amazonaws.com/playthewcc/wp-content/uploads/2014/02/05160627/logo.png playthewcc2015-02-03 10:03:012015-02-03 10:19:15Mexican typical food
0 replies

Want to join the discussion?
Feel free to contribute!

Event with “Fundación Enseñame a Vivir” (Panama)
Scroll to top